April 27, 2018 — New York City: April 23 may have been a normal Monday for most high school students, but for Rohan Padmakumar from Lusher Charter School it will be a day to remember forever. Rohan, child of Ambika Prasad and student of Beau Bratcher, placed as a finalist at the 35th Annual National Shakespeare Competition on William Shakespeare’s birthday while competing against 55 students from around the US on stage at the Mitzi Newhouse Theater in Lincoln Center as the culmination of a year-long competition hosted by the English-Speaking Union (ESU). 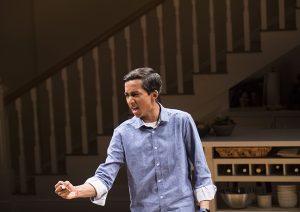 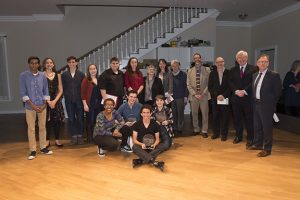 Prior to arriving in New York City for the competition, Rohan wrote:

Shakespeare is, simply put, a genius. He is responsible for coining phrases that we use every day and writing works that made tremendous strides in the field of literature and the art form of theater. In NYC, I look forward to presenting his work to the best of my ability while at the same time interacting with like minded people my age.

Each year, more than 20,000 high school students participate in the English in Action National Shakespeare Competition at the school, regional and national levels through the help of more than 2,500 teachers and 55 ESU branches nationwide. As part of the competition, students perform a monologue and recite a sonnet from Shakespeare and are judged on their understanding of their selected texts and on their ability to communicate their interpretation to the audience. Through this school-based program, students in grades 9-12 develop critical thinking and speaking skills and increase their self-confidence through the performance of Shakespeare’s work.

Since 1983, the English-Speaking Union has given more than 300,000 students of all backgrounds the opportunity to bring the timeless works of Shakespeare to life and to learn to express his words with understanding, feeling and clarity. The competition has been recognized by the Globe Center, the Children’s Theatre Foundation of America and the American Academy of Achievement.

Jackson Dean from Palm Valley High School in Rancho Mirage, California was the winner of the 35th Annual English in Action National Shakespeare Competition and received a full scholarship to attend the Young Actor’s Summer School at the Royal Academy of Dramatic Art in London.

Eli Owens from Penfield High School in Penfield, New York placed second in the competition and received a scholarship to attend the American Shakespeare Center Theater Camp in Staunton, Virginia.

Julia Talbot from Medford High School in Boston, Massachusetts placed third in the competition and received a cash prize of $500.

Joining the top winners in the final round of competition were Gabriela Furtado Coutinho from American Heritage School in Plantation, Florida; Christina Liberus from Urban Assembly School for the Performing Arts in Queens, New York; Nicholas Moseley from The Bishop’s School in La Jolla, California; Julian O’Byrne from Marin School of the Arts in Novato, California;Rohan Padmakumar from Lusher Charter School in New Orleans, Louisiana; Emily Trend from Princeton Day School in Princeton, NJ; and Samantha Vatalaro from Shaker High School in Latham, NY.

The competition brings together renowned actors and members of the theater community to judge the students’ performances. This year, actors Kelley Curran (a former National Shakespeare Competition participant) and Geoffrey Owens joined Michael LoMonico, Senior Consultant on National Education at the Folger Shakespeare Library; Alexandra López, Associate Director of Education at Lincoln Center Theater; and Sid Ray, Professor of English and Women’s and Gender Studies at Pace University to judge the semifinal rounds. To judge the final round, actors Dana Ivey and Graham Turner joined Sarah Enloe, Director of Education at the American Shakespeare Center; Christopher Hodgkins, Professor of English at the University of North Carolina-Greensboro and member of the ESU Board of Directors; and Louis Scheeder, Director of the Classical Studio at the Tisch School of the Arts at New York University. Louis, the longest serving competition judge, has adjudicated with a long roster of former judges, including Sarah Jessica Parker, Sam Waterston, Phylicia Rashad, Blythe Danner, Jesse L. Martin, Cynthia Nixon, Richard Thomas, Courtney B. Vance, Dianne Wiest, and Helen Hayes.

Citing its 35th season this year, the Honorable Bill De Blasio, Mayor of the City of New York, proclaimed Monday, May 23, 2018 as “William Shakespeare Day” in New York City. Laura Hickey, the Deputy British Consul General in New York, read the proclamation and Dr. Paul Beresford-Hill CBE KSt.J, Chairman of the English-Speaking Union, the awarded the competitors certificates of achievement.

English in Action provided the semi-finalists who traveled to New York from around the country with two days of educational and cultural activities, including an exclusive acting workshop by the Tisch School of the Arts at New York University faculty and a tour of The Juilliard School. Perhaps best of all for these teenagers was the opportunity to spend time with other students from across the country who share a love of the English language and, particularly, Shakespeare.

Under the banner of English in Action, the English-Speaking Union (ESU) is a non-profit educational charity that employs the English language to foster global understanding and good will through educational opportunities and cultural exchange programs. Founded in 1920 and headquartered in New York City, the ESU is a national organization with more than 55 branches nationwide and affiliated with a network of more than 50 ESUs around the world.

English in Action educational programs focus on teacher enrichment, immigrant support, scholarships and youth speaking programs. Each year, our programs serve more than 60,000 teachers, students, volunteers and immigrants around the US.

English in Action programs include:

Luard Morse Scholarships sends students from Historically Black Colleges and Universities to study for a semester at a British university.

For additional information about the English in Action, please visit www.esuus.org.

Hynes Teacher Named Finalist for LDOE 2022 Teacher of the Year

Lusher Graduation & Senior Stroll to be held May 22-23

Lusher Charter School to Hold In-person Graduation Ceremony on May 22 at UNO Arena for Class of...

Sarah T Reed Graduation is on May 20!

Join us on Saturday, May 15, 9am-1pm for the Virtual Charter School Virtual Teacher Fair, Part 2! Please register and you will receive an email soon with more information.
For more information call (504) 897-6110